Ah, the Phone Interview. The notorious, daunting, terrifying, anxiety-instilling Phone Interview. I wish I could say I was exaggerating, but I’m not. But don’t worry, I got through it and lived to tell the tale. This is what the last and final round of applying to Disney is like.

So when I say you need to initially give yourself time when you first apply, I wasn’t kidding. I scheduled my interview for the afternoon of September 14, which was one of the earliest dates available. I did that for two reasons:

So my advice would be just treat it like a band-aid: rip it off fast. Just close your eyes and do it. You’ll feel a lot better afterwards. In those two weeks leading up to my interview, I was a nervous wreck, so I couldn’t imagine having to wait for a month before doing the interview. But schedule yourself with what works for you. If you need a month to calm down and prepare, then give yourself a month. But if you’re anything like me, like I said, just get ‘er done.

In those two weeks, I obsessively Googled and researched everything I could about what types of questions they asked in the phone interview and what kind of answers people had given that worked or didn’t work. I was able to make my own cheat sheet/study guide for the interview and that made me feel slightly better about it. But let me tell you, my interview was scheduled at 1:45 that day and the whole morning was pretty much a waste because I literally couldn’t think about anything else. If you’re reading this and thinking about applying or looking for advice on what to say or do, just know that it’s okay to be nervous! It’s probably better that way because it means you care and you’ll want to be as prepared as possible. So without further ado, here’s a survival guide on how to get through the Phone Interview!

1. Smile. This is seriously the MOST IMPORTANT PIECE OF ADVICE YOU CAN GET! And no, this is not a video interview and there is no FaceTime or anything like that involved, but trust me, they know when you’re smiling. And that’s not just a Disney intuition or anything like that and it’s not a myth. Here, try this:

Say “I saw the big red truck drive by today” out loud, without smiling. Now say it again,  but do it with a big, cheesy grin on your face. Hear the difference? Yes, you do. Don’t lie           to yourself. It changes the pitch in your voice and it also probably makes you feel a little      bit better. So just remember to smile THE WHOLE INTERVIEW.

2. Quarantine yourself. Be comfortable in a private place. I made myself some green tea in my favorite Alice in Wonderland mug, got a glass of ice water, put on my comfiest sweatpants and large, oversized Mickey sweatshirt (that I may or may not have stolen from my dad) and locked the door to my bedroom at about 1:00. They say to be prepared to receive the call anywhere from 15 minutes before your scheduled time to 15 minutes after your time, so I wanted to give myself enough time to sit and chill out before that. I put on some Disney music to calm myself down and read over my notes during that time. This is the most important part of the application process, so I would make sure you’re by yourself without any distractions around so you can completely focus on what your interviewer is asking. This is your only chance to make a great impression with an actual human being on the other end, so take it seriously.

3. Be prepared. Google obsessively, no one is judging you. There is so much online about the phone interview! I looked through so many other blogs that had their questions and watched people on YouTube describe their interview and how it went just so I could get a feel of what was most commonly asked. However you choose to prepare, just make sure you say your answers out loud. You don’t want the first time you’re saying them to be when you’re saying them to the Disney rep, because you’ll probably be nervous and might stutter over your words. Which leads to…

4. Avoid vocal fillers. This is true with any form of public speaking. When someone constantly says “um” or “like” or anything of the sort, you notice. And then it’s the only thing you notice and you don’t actually hear what they’re saying because you’re more annoyed at them not being able to speak adequately. Disney wants confident people. People who say “um” in between every word or at the start of an answer don’t come across as confident, so don’t say it. If you’re prepared, then you won’t have a need to pause to think and you won’t say “um” every other word. (And you should just keep this tip in mind in general, it’s a really annoying habit for anyone to have, not just during interviews, please and thanks.)

5. Understand the roles you applied for. As I said in the first round of application, you want to keep your options open for applying, but don’t put just anything down, because they WILL ask you about it in your phone interview. In a lot of the tips I had read, they asked in depth questions about your top choices and then not really anything else. In my interview, the Disney rep asked about everything I had a moderate or even a low interest for—and that included things like floral, Bibbidi Bobbidi Boutique, transportation, and quick service. I had really good notes for my top roles and understood those job descriptions really well, but as soon as she started asking about these random ones, I didn’t have a really good understanding of what was required for the role. When she asked me about floral and why I would want that job, my immediate response was “Well, flowers are pretty.”

Yes. I actually, legitimately said that in my Disney interview. But I laughed and recovered really quickly as if that wasn’t my actual answer and said I read that role was delivering and arranging flowers for centerpieces sometimes at weddings and events and I said something about how awesome it would be to be a part of someone’s special day in a small, behind-the-scenes type of way, and I guess she liked that answer, because I eventually did get hired (although not to be in floral). So just make sure you read through the job descriptions of literally every role you said you had any sort of interest in, because even though they won’t spend a lot of time talking about it, they will probably ask you about it because I was asked about all of mine.

6. Be yourself. This is actually your time to shine. There is no computer looking for specific answers on the other end that will spit back a yes or no at the end of the interview. This is an actual Disney person looking for an excited Disney personality on the other end. You only have about 20-30 minutes with them, but that was plenty of time to let them know what I was about. And Disney chooses specific people for these phone interviews to make you feel very comfortable. I was the biggest ball of nerves before my interview, but once I started talking with my rep, I was confident and felt like I had known her for years. So just talk with them and be bubbly and smile!

7. Ask them questions. At the end of your interview, they’ll ask, “And do you have any questions about the interview or what comes next?” and I asked about what advice she gives cast members, how she got the position she was in, and if there was a possibility of using this internship as a foot-in-the-door type of deal to potentially make a career with Disney after the program. You can ask them whatever you want, but I chose these questions because it shows interest in the program and in the person you’re talking to (people like talking about themselves and their own careers, so brownie points for asking about the interviewer). Whatever you choose to ask them, I would definitely use the opportunity to ask them something, because this is another chance for your personality to shine through.

Here are my notes that helped me through the phone interview. I wrote them all out on pieces of paper so I could have them laid out in front of me during the interview. I didn’t want to be typing or scrolling through a computer while on the interview, so that’s why I wrote it down. I also wrote myself little notes just in case I was nervous so I would remember to smile and you know, breathe.

After the interview, you have to play the waiting game. Fortunately, I didn’t have to wait long. I had my interview on September 14th and then received my acceptance into the program on September 18th, even though they said final decisions would not be made until the middle of November. (Advantage to applying early.)

The next steps are a blur: accepting their offer, applying to housing, and putting a down payment on your dorm, but they all come within about 24 hours of acceptance, so make sure you’re constantly checking your email! And just know that once you get that email, you will be able to fully breathe again!

4 thoughts on “The Phone Interview” 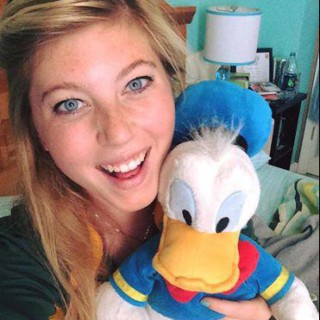